Rev. Caleb Soo is married to Sis Ai Yue, and blessed with a daughter Sophia and son-in-law Bryan.

Rev. Soo graduated from the Southeast Asia Bible Seminary in Indonesia in 1981. Between 1984 and 1986, he read Master of Theology at Singapore's Trinity Theological College through a partnership with The South East Asia Graduate School of Theology. In 1993, he obtained his Doctorate in Religious Science in Taiwan's Fu Jen Catholic University's Faculty of Theology.

Rev. Soo's areas of service includes evangelism, pastoring and theological education. Between 1981 to 1984, he did groundbreaking evangelism work in a small village. From 1986 to 1990, he served as a preacher in Batu Pahat Saving Grace Church, and was subsequently ordained as Senior Pastor.  From 1990 to 1991, he was Senior Pastor at Peace Presbyterian Church in Johor Bahru.  Between 1994 and 1998, he was a lecturer at Singapore's Trinity Theological College.  Rev. Soo became the Moderator of Singapore Life Church in 1999, while serving as guest lecturer at several seminaries.

The ministry motto which Rev. Soo lives by is "Where there is no vision, the people are unrestrained" (Proverbs 29:18).  With twenty-odd years of practice and experiences in ministry, he strongly believes that church pastors need to possess vision and far-sightedness, stance and vigor, commitment to love, and team spirit. One must also be willing to accept and work with people of different gifts.

Towards believers, as long as one demonstrates sincere love and dedication in caring for them, it will not be difficult to earn their respect, and see amazing results of lives that grow and bear fruit. Towards non-believers, we must strive to proclaim the gospel − especially in equipping saints to evangelise; God will surely add the saved to our ranks. Rev. Kevin is married to Sis Anna, and blessed with a son and two daughters: Jonathan, Phoebe and Sarah. Anna, who was formerly working as a secretary, is now a stay-at-home mum focusing on bringing up the children.

Rev. Kevin was brought up in a Christian home and had parents who were fervently involved in church. Having accepted Christ as his Lord at the age of 13, he began to participate actively in fellowship and choir. During his four years in university he participated in the varsity fellowship then known as Campus Crusade for Christ, and it was there that he addressed his faith seriously and thought about the gospel mission. After graduation, he spent six years at Hewlett-Packard as an engineer.

In 1999 he responded to God's call, and with the support of the church he went to Taiwan to study at the China Evangelical Seminary. Rev. Kevin obtained his Master of Divinity in 2002, and thereafter returned to serve in SLC.

Rev. Kevin's areas of service in SLC includes Mandarin Worship, 1520 Fellowship, the Young Adults Fellowship, iRock Fellowship, Evergreen Fellowship, Sunday School for adults, pre-marriage counselling, and Family Ministry. His burden is for the shaping of committed disciples of Christ, as well as establishing holistic families, so that the faith can be passed on to future generations. 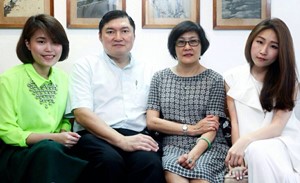 Rev. Tan is married to Sis Cui Er, who is a preschool teacher. They are blessed with two daughters: Xin Yi and Xin Ning.

Rev. Tan accepted Christ in 1981. He graduated from the Nanyang Academy of Fine Arts (NAFA) in 1983, majoring in advertising design.

Rev. Tan experienced three separate callings from God: the first was during his time in Young Adults Fellowship (1981), the second was when he was studying in NAFA (1982-83), the third, when he began to work (1984-85) − all within a period of four years. After struggling for three months to make a decision, he finally responded to the call as he was deeply touched by God.

In 1985, he enrolled into Trinity Theological College; obtaining a Bachelor of Theology in 1989 and, subsequently in 1999, a Master of Ministry.

In 1990, Rev. Tan joined the SLC Pastoral Team and is currently serving in two main areas: the Evangelism Explosion Ministry and the Missions Ministry.

Rev. Tan's pastoring motto is "Rejoice in what the Lord rejoices in, grieve in whatever grieves the Lord, be burdened by what the Lord is burdened with, and love whatever the Lord loves". His definition of a blessed church: "Blessedness is more than just happiness, but alludes to blissfulness when in God's kingdom to the envy of others. Blessings doesn't guarantee cheerfulness, or happiness, or treasures of this world. For Jesus, blessedness is the experience of hope and joy, impervious by external influences. However heavy the costs we pay, by following Jesus, you will find genuine happiness − joy and hope." 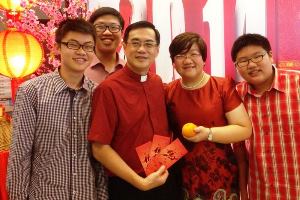 Rev Tang Khoon Hoe is married to Sis Yvonne Choo and they have three boys, Benjamin, Jeremy and Nicolas.

Rev Tang was born in a Christian family and grew up in a traditional Chinese family where both his parents are Teochews from China.  He accepted Christ in 1997 when he was 16 years old, at one of the church camps.

It was in 1982 when God first called Rev Tang to serve Him.  At that time, he was still studying in Ngee Ann Polytechnic doing Building Management. However, he did not respond to God’s call. His main objective then was to complete his studies. There were a couple more instances that God prompted him to serve and be a part of His work. But due to many reasons, he decided against it and pushed Him aside. Instead he continued to work in SMRT as a supervisor for the next 10 years.

Finally in 1998, Rev Tang made the most important decision of his life. He left his comfort zone at SMRT and went to Trinity Theological College where he underwent theological training to become a pastor.

After graduating in 2002, Rev Tang joined the pastoral team in Singapore Life Church and served as the Assistant Pastor overseeing the Youth and Children ministries in the English congregation. A year later, he took on the role as Pastor in-charge of the English Worship Service, till now. Rev. Jeremy Ng is married to Sis Sophia Chiang and blessed with a son and a daughter: Jared and Jadee. Sis Sophia is a school counsellor with the Ministry of Education.

Born 1965 into a traditional Taoist family, Rev. Ng's father is Teochew while his mother is Hokkien. Rev. Ng came to be the first Christian in his family. By the grace of God, his parents, sister and brothers all became believers subsequently.

Rev. Ng accepted Christ as his Lord in 1983. The following year he graduated from high school and joined the Singapore Armed Forces as a full-time soldier. In 1991, he responded to God's call to full-time service and entered Singapore Bible College to begin his studies. In 1995, he received a Bachelor of Theology. Later in 2008 he obtained his Master of Divinity through part-time studies. Rev. Ng has been pastoring churches since 1995, first Chen Li Presbyterian Church, then Bartley Christian Church, and most recently Providence Presbyterian Church (formerly the Mandarin congregation of Orchard Road Presbyterian Church).

In August 2012, Rev. Ng joined the ranks of SLC's pastoral team. His areas of focus are: the Teochew-Mandarin Service, pastoral care for the Seniors Fellowship and Women's Fellowship,  the Seniors Activity Centre, and the SLC Choir. He is also leading the team behind the church's website and information content management, the training of follow-up mentors as well as the gospel classes for seniors. He also administers to funerals and other sacraments. Pastor Dr. Yeo Peck Chan completed her studies at the Chinese Culture University in Taiwan (majoring in Theatre Arts and Film), and the Shanghai Theatre Academy (Master and Doctorate in Theatre Arts).

After graduation, Pastor Yeo joined the National Trades Union Congress Research Unit as Culture Secretariat and Head of Drama Section, and later MediaCorp as Director of Talent Development. She would often be invited to assume roles of theatre advisor and film lecturer.

Growing up in SLC, she accepted God's calling in her sophomore year. Whilst being equipped for a professional life in theatre and film, God led her to experience His further promptings at different stages of her life. In 2002, Pastor Yeo responded to God in a tangible manner by pursuing theological studies full-time. She went on to obtain a Master of Divinity at Trinity Theological College, and thereafter a Doctor of Theology.

In May 2007, Pastor Yeo joined the ranks of full-time staff in SLC serving as director in the Creative Ministry. Her main responsibilities were in events, worship renewal, and multimedia projects. Her pastoral motto is "trust in the Lord's might, striving with one's utmost", while her hope for the church is for her to be "rooted in God's word−loving God and loving people; holistic and united−recipient of God's blessings". Pastor Astrid Lee May Sze grew up in a traditional Taoist home of Hokkien heritage. She is the second convert in her family. By God's grace, after her conversion, she witnessed her sister, mother and uncle's family come to the faith as well.

Pastor Astrid accepted Christ as Lord in 1989, and at the invitation of classmates, came to be in Singapore Life Church. From 1992 to 2005, she was a Sunday school teacher for children and youths. In 1992, she began her undergraduate studies in Education at Nanyang Technological University. During her time there, she also served in the ministry then known as Campus Crusade for Christ. After graduation in 1996, she became a primary school teacher.

In 2005, Pastor Astrid answered God's call for her to go overseas and assume short term campus ministry work. Upon her return in 2009, she enrolled into Singapore Bible College for the Master of Arts (Biblical Studies) program. After her graduation in 2012, she began serving in Singapore Life Church.

Pastor Astrid's main areas of service include the 1520 Ministry and Young Adults Fellowship, as well as the administration of the church's Fellowship-Cell Group Ministry. Her hobbies include listening to music, reading, swimming and jogging.